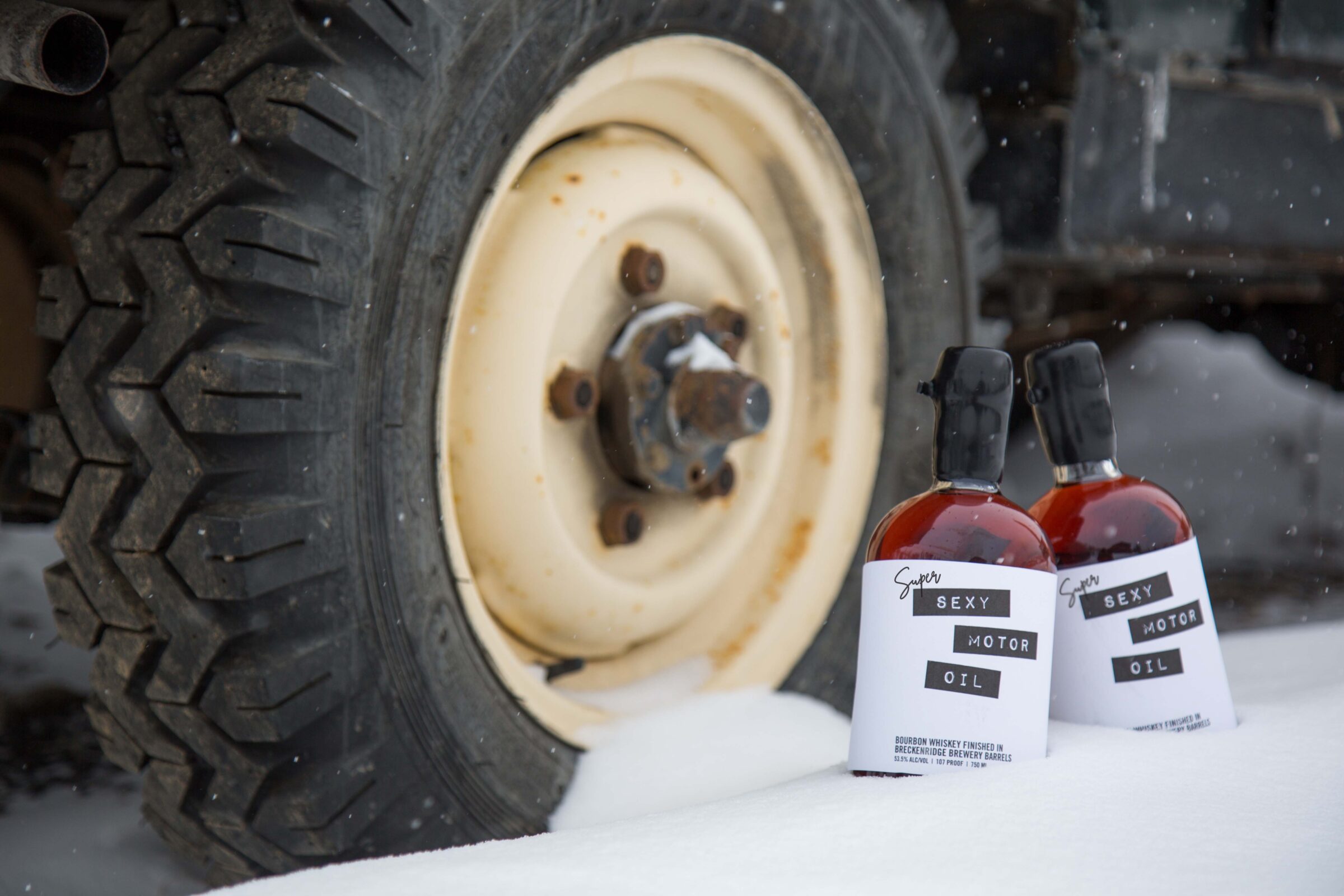 This Valentine’s Day, things are getting ‘Super Sexy” with the second release of Super Sexy Motor Oil. Series Two brings unique flavors of coffee and coconut. As the story goes, Breckenridge Brewery took our freshly dumped Bourbon Whiskey barrels and aged their Imperial Oatmeal Stout in them. This time, they added coffee and coconut. YUM! We took those barrels back and filled them with Bourbon Whiskey and aged it for over a year and we are calling this one, Super Sexy Motor Oil.

This release will be the third time we’ve produced a beer-barreled whiskey and they have all been damn good so far. This original collab kickstarted a larger partnership with Breckenridge Brewery with the biggest collaborative release in Nov. 2021 with Buddy Pass, an Imperial Stout Cask Finish Whiskey. We are already aging Series Two of Buddy Pass that will be distributed across 5 states, set to hit the shelves mid-Oct.

The Story Behind the Original Sexy Motor Oil

If the name Sexy Motor Oil (SMO) doesn’t intrigue you enough, then the story behind it will. So here we go. It is not uncommon for the Breckenridge Distillery to be confused with the Breckenridge Brewery and vice versa. That is reason enough to collaborate, but let’s set things straight, we distill whiskey and they brew beer.

“They get our barrels for their Sexy and we get their barrels back for our Sexy.”

When designing the label, Bryan Nolt Founder and CEO wanted something subtle because the whisky itself was already so complex. Breckenridge Distillery Creative Director Connie Turner put pencil to paper to design something simple yet “sexy.”

A few years ago now, Jimmy and Suzanne were doing a little “market research” (if you will) after a long day’s work at her husband Anthony’s bar, Kenosha Steakhouse. They cruised over to talk shop and sip on the infamous Bourbon County from Goose Island Brewing in Chicago. Bourbon County is a beers nerd’s Phoenix, coveted and hard to come by, most noted for its boozy notes and dreamy smooth finish. Anthony was taking sips of beer with them and out of his mouth came…”Yummmm, this is like sexy motor oil!” Jimmy and Suzanne’s ears perked up, they looked at each other with a mutual smirk of brewer’s insider knowledge and Jimmy stated: “we’re creating a beer for that name.” And thus, Sexy Motor Oil was born. “We knew the name before we knew the beer,” said Suzanne. “Getting SMO’d is for real!”

SMO was brewed to be very high in alcohol and easily taken as a “shot” replacement. The bold, smooth flavors of chocolate and roasted barley complement the flavors of our whiskey perfectly. We fantasized about how we could do a collaboration using these barrels to age the whiskey for a full loop. “They get our barrels for their Sexy and we get their barrels back for our Sexy,” said Hans Stafsholt.

“SMO and Breckenridge Whiskey work so well together because, on the surface, they both have quite intense flavors,” explains Stone Fisher. “The more experienced taster will begin to discover the intense caramel notes of whiskey pairing with the chocolate notes of the SMO. The high alcohols of the whiskey can be muddled by the smoothness of the SMO. By aging & reverse aging, both products benefit by gaining flavors that otherwise couldn’t be imparted during their respective production processes.”

Our whiskey barrels are freshly dumped and personally taken to the brewery to be filled with their SMO Imperial Stout. SMO has the most complex grain bill of any beer the Brewery brews; rye barley, roasted barley, double roasted crystal malt, chocolate malt and oatmeal. All of these malts combine to give SMO a smooth, rich complex flavor.

These barrels are monitored for flavor and maturation rate (each barrel is different) over the course of the beer’s residency right up until the Brewery feels the beer has the right balance of bourbon characteristics. Months, to sometimes more than a year later, the Brewery harvests the beer from the barrels and get them back to the Distillery as quick as possible, sometimes in 20 minutes or less. For 10-13 months, the whiskey sits in the beer barrels mingling with the stout flavors left in the barrel. Once the barrels have reached the perfect flavor profile, we empty the barrels, decide on the perfect proof, in this case, we went straight barrel proof (around 107pf), bottle it and it hits the shelves.

This is a very limited release and we expect that this will fly off the shelves. It will be released at 11 a.m. on Valentine’s Day 2022 exclusively sold at Breckenridge Distillery’s two locations. The good news, we have another barrel aging that could bring a third release V-Day 2023. But why wait?

Get your favorite Breckenridge spirits delivered to your door

14 Boo-zy Halloween Cocktail Recipes You Can Make at Home

Q&A with the Founder: Distilling at High Elevation