2020, where do we start? It was a year to dig deep and find the silver lining, to look at the good and positive and to be thankful. Here are 10 of the best moments 2020 brought us.

In 2019, we launched the Collectors Art Series, a unique project which illustrated the art of blending whiskey through the art of blending color, its story captivated fans! In February 2020, the project was awarded Icons of Whisky for Campaign Innovator of the Year. This award showcases a brand that has demonstrated communication and marketing excellence in the promotion of its people, products and place. The Collectors Art Series will return summer of 2021.

There’s a compelling argument to be made that bourbon is America’s most important spirit. VinePair offers its list of 2020’s Top 30 Best Bourbon Whiskeys for Every Budget.

We offer more than 20+ Breckenridge spirits, some exclusively sold only at the distillery. Whether a new product or an existing one, it is all about quality, color, density, nose, mouthfeel, flavor and finish. In 2020, we released 3 new spirits that are already making a name for themselves. Our Madeira Cask Finish Whiskey joined our wine cask finish family early in 2020. Right off the bat, it was awarded gold, 94 pts at the New York International Spirits Competition. In June, we launched our Double Barrel Whiskey which we can’t seem to keep in stock (currently sold out). We rounded out the year with what Bryan Nolt is calling, “the best product we’ve ever released,” our Rum Cask Finish. It was recently named one of the best American whiskeys of 2020 by Breaking Bourbon (read more below). Our Madeira Cask Finish will be released nationally in 2021 and Rum Cask Finish is currently nationally distributed.

5. Breck Distillery Teams Up with Flaviar to Release Corn Trooper

Corn Trooper 2020 United Craft Bourbon is a union of all of Flaviar’s favorite craft Bourbons from their journey across the US. We joined 7 distilleries to help Flaviar craft their own bourbon. Learn more about Corn Trooper.

Voted on by Summit County locals, Breck Distillery Restaurant was awarded Best Cocktail in Summit County for the third year in a row. Additionally, for the second time, the Distillery won Best Restaurant in Breckenridge. Huge thanks to all of our whiskey fans out there. If you haven’t visited us before, we invite you to enjoy a world-class dining experience and exceptional hand-crafted cocktails.

There’s something to be said about going off-the-beaten-path and finding something a bit rarer or less well-known. HiConsumption rounded out their favorite bourbon distilleries and Breckenridge Distillery captured a spot.

“It may be one of the best products we’ve ever released,” said Bryan Nolt, Founder and CEO. It didn’t take long for our Rum Cask Finish to make waves in the industry. After sipping our Rum Cask, it was no surprise that Breaking Bourbon included it in the Best American Whiskeys of 2020.

We welcomed Executive Chef David Root from Portland, OR to our restaurant in the Fall of 2020. His style is inspired by American culinary heritage and he brings big and bold flavors that showcase American’s melting pot of flavors. When Chef David Burke and David Root were designing the BDR menu, they wanted to give people local, seasonal and approachable dishes and American food that complimented the fantastic spirits of Breckenridge Distillery.

After releasing our Powder Hound Whiskey in 2018 we have donated over $14,000 to the Frisco Animal Shelter, $7,000 of that in 2020. Powder Hound is still available exclusively at the Breckenridge Distillery and $5 from every bottle sold is still being donated.

Take a step back in time to our 2018 and 2019 best moments. Hope to see you all in 2021! Learn more about the Breckenridge Distillery and our experiences.

Get your favorite Breckenridge spirits delivered to your door. 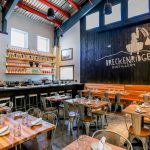